Use Genetic Testing to “Quench a Brain on Fire” 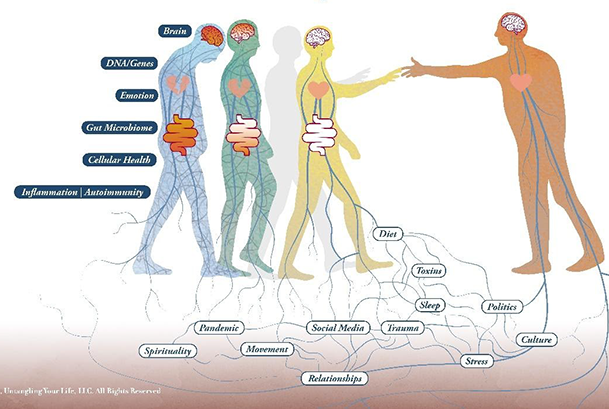 A guest post from our clients at Potomac Psychiatry:

I start with the premise that all human disease is genetic.
— Paul Berg, Ph.D., Nobel Laureate

At Potomac Psychiatry we always try to be on the forefront of personalized medicine. By using genomics to help with our clinical decision making, not only are we better able to choose appropriate medications, but we are better able to support our patients naturally with personalized nutrition and supplements, sometimes even allowing us to avoid medications. IntellxxDNA helps us optimize outcomes for everything from anxiety to ADHD to cognitive decline.

Why are genetic tests so crucial to blueprinting and building better mental health? As discussed in a prior blog, your DNA creates the information-system blueprint to build out your subatomic, atomic, and molecular mental health in every one of your 30 trillion human cells that influence your mental and physical health. A new genetic test identifies genetic variations that predispose you to “setting your brain on fire” and helps create the roadmap to extinguish that fire to improve mental wellness.

In this blog you will learn about…

More people than ever are struggling with mental health problems. Why? This is a question that my colleagues and I wrestle with daily. The answers to this question are complex, however there is one that remains quite simple: while the human genome has not materially changed for the last 50,000 years, our environment has altered dramatically, creating a profound effect on which of our genes are expressed, and which are suppressed. How?

As you can see from the mental health ecosystem infographic below, many of the environmental “roots” that affect how our genes are “turned on” or “turned off” have been created, or have dramatically changed, in the last few decades. 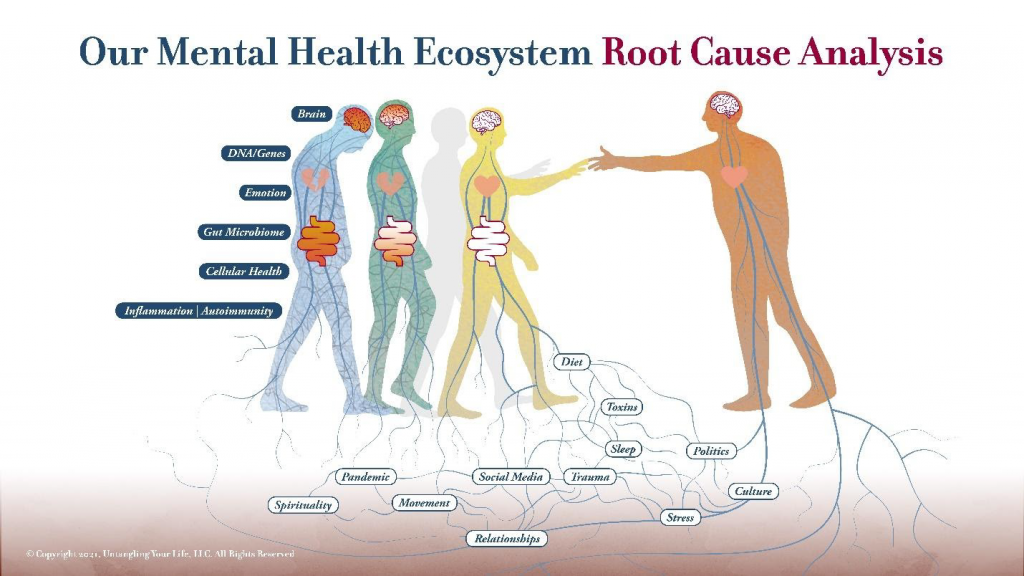 For example, over the past several decades we have witnessed increasing levels of environmental toxins, greater challenges getting a full night’s sleep, a Western diet with more processed foods and simple carbohydrates, and now a global pandemic. Amidst all of this turmoil, the exponential rise in the popularity of social media apps like Facebook, which launched less than 20 years ago, has only increased our levels of chronic stress and its effects on our immune system.

Each of these examples have one important thing in common, they modulate specific genes in your cells to produce increased levels of inflammatory proteins that circulate throughout your body and invade your brain to cause brain inflammation.

It’s not our species’ fault that our “hunter-gatherer world” genome can’t keep up with the fast-paced changes of life in the twenty-first century. However, we do have some control over how we can effectively influence that genome toward better mental health! The good news is that we can determine our personal vulnerabilities to debilitating brain inflammation through a brilliant new genetic test called IntellxxDNA™.

IntellxxDNA personalized genomic reports help psychiatrists understand a patient’s individual gene function, which leads to exceptionally powerful, individualized prevention and intervention strategies to blueprint and build better mental health. The best part about IntellxxDNA report is that the gene-targeted interventions include diet, lifestyle, and supplements that have been supported by numerous scientific studies; including their effective doses; leading to a personalized roadmap for optimizing your mental wellness.

IntellxxDNA reports are divided into categories of health conditions showing both risks and benefits of your personal genetic code. As a Clinical Decision Support Tool, a psychiatrist can use an IntellxxDNA Genomic Report to analyze the clinically relevant information about your personal genetic make-up. This includes information about potential interventions that can be used to optimize your mental wellness and brain health.

The connection between our mental health and our biology is irrefutable—and uncovering and focusing on certain “risky” genes can be an essential component of psychiatric treatment. To illustrate this mind-body connection, today I want to explore how certain genetic variations relate to systemic and brain inflammation and poor mental health outcomes, and then discuss how we can use this knowledge to help your immune system help you! In my discussion below on inflammation, I am going to share some of what I have learned as I have studied genomics with IntellxxDNA and combined it with my psychiatric knowledge.

The IL6 Genetic Variant
There are a number of Immune System and Inflammation Genes tested by IntellxxDNA that can tell you quite a bit about your health, and today we will focus on four of them.

A variant of IL6 is known to increase the immune system’s inflammatory response and create cytokines (proteins that cause inflammation) that cross the blood brain barrier into the brain, and activate the glial cells to cause brain inflammation. This IL6 variant also creates a higher risk of mood disorders including depression. Increased release of IL6 in major depressive disorders is associated with a poorer response to treatment and is associated with a wide range of depressive symptoms. Increased IL6 activity may also cause depression through activation of the hypothalamic-pituitary-adrenal (HPA) (“fight, flight or freeze”) axis, or influence neurotransmitter manufacture and breadown; and it also causes the release of other cytokines that cause inflammation, known as TNF Alpha and IL1. Supplements such as sulforaphane, quercetin, and omega 3s can “turn off” this IL6 variant to reduce brain inflammation.

The TNF Alpha Genetic Variant
Numerous studies have shown that patients with mood disorders have increased levels of the TNF Alpha protein coded by this gene. This cytokine also crosses the blood brain barrier, where it activates the microglia that further inflame the brain. A number of other psychiatric conditions are associated with this gene and brain inflammation.

In Autism Spectrum Disorders, levels of TNF Alpha cytokines are 50 times higher than normal in the cerebral spinal fluid of these patients, and there are elevations in IL6 as well. And the higher the levels of TNF Alpha, the more severe the symptoms of autism.

In a study of children with PANDAS/PANS, which affects 1 in 200 children, 100% of them were found to have the genetic variant of TNF Alpha associated with increased brain inflammation. The same TNF Alpha variant confers six times the risk of celiac disease, a condition that is associated with gut inflammation and serious neurological problems, which may be why a gluten-free diet often helps alleviate some of the symptoms of autism.

Luteolin, Quercetin, and Rutin have shown promising results in “treating” this TNF Alpha gene variant in children and adults suffering from autism. Combining all three together decreased TNF Alpha in the bloodstream by 60%, and when given to children with autism, they demonstrated improvements in communication, living skills, and sociability.

This TNF Alpha variant also confers 2.8 times the risk of developing OCD, by activating what is known as the glutamate system in the brain. Glutamate also worsens symptoms of anxiety and mood disorders. Excess glutamate also reduces the brain’s ability to grow new brain cells and create new synaptic connections between them, which can reduce one’s ability to learn new information.

TNF Alpha also makes less serotonin available in the synapse by increasing its reuptake, further contributing to anxiety and depression.

TNF Alpha levels are also much higher in patients suffering from Alzheimer’s Disease, one of the hallmarks of which is an impaired ability to grow new brain cells and make new connections between them. Sulforaphane has been shown to help clear the amyloid protein tangles in the brain cells of these patients—proteins that accumulate to cause cell damage—and reduce brain inflammation. And Lion’s Mane has been shown to reduce mild cognitive impairment by reducing TNF Alpha levels. When the supplement was stopped the improvement went away.

These gene variants can negatively affect health in other ways, such as Crohn’s disease, autoimmune diseases, rheumatoid arthritis, atherosclerosis, type 2 diabetes, and cancer.

This TNF Alpha gene can be “turned off” with supplements such as Lion’s Mane, capsaicin, sulforaphane, and milk thistle, to help bring about symptom relief and better outcomes.

IL6 and TNF Alpha genetic variations can also be involved in promoting “brain fog” which is a common complaint in patients suffering from a chronic mood or anxiety condition, and poor regulation of these genes can also be a precursor to developing dementia.

IL1 Alpha and IL1 Beta Genetic Variations
These genes are associated with higher rates of dementia, schizophrenia, and autoimmune diseases, and have been shown to activate those microglial cells we mentioned before. With these two genetic variations, some of the same supplements noted above can also help to switch off their effects, along with Resveratrol, omega 3s, and curcumin.

These four genes not only cause brain inflammation by negatively affecting your immune system, this inflammation in turn accelerates the development of many of the most common mental health problems plaguing us in today’s world.

Bipolar Disorder: Evidence for involvement of the immune system, and in a broader sense, inflammation in mood disorders, including Depression and Bipolar Disorder, has been steadily accumulating in recent years. In addition, a complex mixture of behavioral changes observed in inflammatory states, which includes mood changes such as anxiety, depression, failure to concentrate, lethargy, and “feeling sick” (my patients describe feeling like they have a low-grade flu) that are associated with proinflammatory cytokines such as TNF Alpha, IL6, and IL1 Beta. These cytokines can actually induce mood disorders in physically ill patients without a previous mental illness; and a great percentage of patients with mood disorders also have autoimmune pathologies, such as hypothyroidism, rheumatoid arthritis, diabetes mellitus, hepatitis, and Crohn’s disease. Patients who suffer from autoimmune diseases also have an increased risk of developing bipolar disorder.

Two studies used PET Scanning to demonstrate a brain inflammation condition in patients with bipolar disorder, including increased activation of immune system cells (glial cells), and damage to brain cells (often reversible with the right supplements, diet, and lifestyle changes) in the hippocampus of bipolar patients compared to healthy controls. The hippocampus is intimately involved in learning new information, and regulating and processing emotions. No wonder these patients complain of brain fog!

PTSD: Elevations in the bloodstream of TNF Alpha, IL6, and IL1 Beta cytokines are also associated with PTSD. And neuroimaging studies in PTSD patients demonstrated that these elevated inflammatory biomarkers are associated with altered structure and functioning in brain regions that are responsible for the regulation of stress and the processing of emotions, including the amygdala, hippocampus, and frontal cortex.

Alzheimer’s Disease: Remember that “methylation gene” – MTHFR? When this genetic variant is combined with one of these inflammation genes, they triple the risk of Alzheimer’s Disease and vascular dementia (caused by a narrowing of the tiny blood vessels in the brain that nourish our neurons with nutrients and oxygen).

Use Genetic Testing to Determine the Root Causes of Brain Inflammation

Knowledge of your personal genome gives you the power to restore your health and improve your relationships by affecting how your genes express themselves. As you have learned in our Root Cause Psychiatry blog series so far, simply identifying symptoms and prescribing medications is not enough.

Without the type of genetic testing provided by IntellxxDNA, a psychiatrist is simply not as effective in treating individuals with chronic unremitting emotional pain—who often present to us feeling horribly broken and hopeless after other treatment efforts failed to improve their symptoms. As you have learned today, chronic inflammation may be one of the most important root causes of all!

If you would like to learn more about Potomac Psychiatry’s Root Cause Psychiatry Program, feel free to contact them.